I never thought too much of myself. I never made an impression on anyone when I was young. I always thought if I met my old schoolmates they wouldn’t know who I was because I was just a nobody during a time of my life where being a “somebody” was everything. I’m sure a majority of people go through phases of thinking they’re invisible to the world around them. That they don’t matter and nothing they say or do matter.

But in Jeremiah 1:5 God speaks and says, “Before I formed you in the womb I knew you.” Before our mothers conceived us, God knew us. The word knew here means: have knowledge of; familiar friend; mark; be sure of   So I think it’s safe to say God was already familiar with us and had marked us for His purpose BEFORE we were even conceived in our mother’s womb. You and I have always been “somebody” to Him.

On Tuesday, January 22, 2019, the governor of New York, Andrew Cuomo signed a bill that would allow not only physicians but others in the medical profession to murder the unborn babies up until the day before they are born. Yes, I said murder! And not only did he sign this heinous bill but he and others laughed and rejoiced over the fact that now any woman at any stage of her pregnancy can legally kill her baby without any consequence to her or the one performing these assassinations. THEY LAUGHED & REJOICED!

The unborn are regarded as nothing but an inconvenience for those who are too irresponsible to take measures not to get pregnant in the first place. As these inhumane leaders rejoice in their ability to make laws here on earth, I’m sure The One who gave the commandment, thou shalt not kill is grieved once again at His creation. This law is all about control. “One up” on our president and Christians all over America.

These are not just babies. They’re not just the unborn. They are human beings that God already knows. He assigned them life and their mothers have chosen to take that life away before they can even begin to live it. Who are they killing? What where/are the destinies of these precious lives beings regarded as nothing but an intrusion on someone’s life? Are they killing the next great man or woman of God? The one who has the next great invention? The mother who loves beyond her blood kin? The father who protects all the neighborhood kids? God knows who they are and He is grieved. God had/has a destiny already for them, a perfect will, if they could only live.

Do you grieve when you hear such news? Does the desire to fall on your face before God overwhelm you in hopes to somehow change the darkness of this world? Have the hearts of not just Christians but people, in general, become so hardened that we can hear such news and not be touched?

Edmund Burke said, “The only thing necessary for the triumph of evil is for good men to do nothing.” Satan is rejoicing as he wins one victory after another because we the church aren’t doing our part. I know we can’t all be like Dr. James Dobson or Dutch Sheets going all over the world and speaking but we can pray.  We have to wake up the sleeping giant called the church and unite for the sake of the unborn, for our children and our children’s children.

2 Chronicles 7:14  If My people who are called by My name will humble themselves, and pray and seek My face, and turn from their wicked ways, then I will hear from heaven and will forgive their sin and heal their land.

God have mercy on our land, in our homes, and in our wombs. 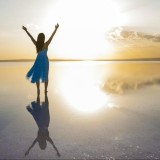